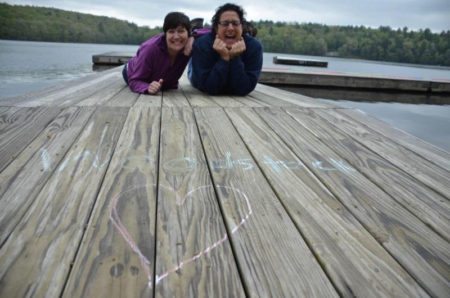 Diane and Shelby at the 95th Celebration!

Diane Belcher and Shelby Harris are proud Woodstocker Alums who met at Camp Woodstock in 1989 and are happy to remain great friends in Boston to this day!  Diane started at Woodstock in 1980 as a Nipmunk.  After 2 weeks, she called her parents to see if she could stay for 2 more weeks and she went on to be a regular 3rd and 4th session camper. Diane became an LIT and then came back as a 2nd year LIT (What we currently call the CIT program) she then extended another four weeks to join the kitchen staff.  The following years included being a cabin counselor, unit one leader, arts and craft director and LIT director.

Shelby first joined the Woodstock family as a Pequot in 1987 and went on to be an LIT. Those years were followed by roles as a legendary Pequot counselor and canoeing instructor.  In 1993, Shelby and Diane were LIT directors and shared a “shack” in the Pines. Her favorite memories include:  waiting for the Sysco truck during the kitchen staff days, pranks on the cabin field, hours on the waterfront and many verses of “Shut de Door” in chapel.

Currently, Diane has made her home in the Boston area.  She works for Harvard Business Publishing and lives in Newton with her dog, Zoey.  Diane enjoys golf and has enjoyed traveling a lot the last few years:  Hong Kong, Singapore, Dominican Republic, Cancun, Malaysia, London, Chicago, California and Australia to name a few. She still visits Camp and to visit family, because her niece and nephew are both current Woodstockers!

Shelby lives in Boston and has made a career of working in colleges and universities.  She currently serves as the Associate Dean of Students at UMass Boston and was able to introduce her students to the magic of Camp Woodstock at their fall retreat.  She received her PhD in higher education administration and loves to sail, scuba dive, and travel.  Most recently, she helped crew a 38′ sailboat from Bermuda to Antigua and looks forward to many more stamps in her passport and adventures ahead!

Diane and Shelby are lucky enough to get together a few times each year often with other Woodstockers (Heather Thompson, Alison Fine and Kathy Snyder).  Diane adds, “Laughs abound each and every time we get together and we quickly forget that all the years have gone by.” The attached picture was taken during a recent visit to camp and is a great representation of their love for Woodstock and the fun they have when together.